Some of us research our miniature settings extensively, making a point to understand the story and the people behind the scenes we are creating. This is actually one of the great pleasures of doing a miniature setting, the chance to research a place or character and then make it in a scale model for others to see. Here is my research on Annie Hayworth in The Birds. I will be creating Annie’s garden.

Annie lives in Bodega Bay because that is where Mitch spends his weekends. They are no longer  a couple but as Annie explains to the wealthy and classy socialite, Melanie Daniels, who is in town pursuing Mitch, she still wants his friendship:

A production memo describing Annie is quoted in the book The Wrong House: The Architecture of Alfred Hitchcock. It describes Annie and her house in Bodega Bay:

Annie Hayworth is about 27, or at most 28. She taught when she was somewhat younger, at a private school in San Francisco. For emotional reasons, She has moved into Bodega Bay and has secured the job of teaching at the local school. Again, we have a literate person in a modest setting. Her one story home would contain a large number of (a) books that she had from home and school, (b) recently acquired paper backs, the reason for the latter is that economically she might not be able to afford to buy hard cover books in any great quantity. She has one or two prints on the walls of her living room. They would be Braque, maybe something Mexican from the Museum of Modern Art, and perhaps even, she might be catholic enough in her taste as to have a Grant Wood print. She might have on the mantel some pre-Columbian pieces. Her furnishings would be quite modest but very tasteful, perhaps a little chintzy. There ought to be a photograph on the wall of Annie and her parents when she was much younger. Then, perhaps, also in the room are again college pictures. Perhaps, even a picture of herself with the children at the private school in San Francisco.

The research of Annie’s interior should be sought:

(a) at the school teacher’s house in Bodega Bay

(b) a slightly up-graded teacher’s home in San Francisco, and perhaps,

(c) a female professor’s room at Berkeley or Stanford

and the setting should take advantage of the combination of these backgrounds.

One should add, of course, that there is a television set in both the Brenner home and in Annie Hayworth’s home.

Some thought should be given to music in Annie’s house. This should consist of a player and piles of records.

ANNIE: I came up here for two reasons. To begin with, I was bored with my job in San Francisco. I was teaching at a private school there… well, you know, you probably went to one yourself.

ANNIE:  Then you know. Little girls in brown beanies. Deadly. Here I have a life. I’ll go into that classroom on Monday morning, and I’ll look out at twenty- five upturned little faces, and each of them will be saying, ‘Yes, please give me what you have.’ (pause) And I’ll give them what I have. I haven’t got very much, but I’ll give them every ounce of it. To me, that’s very important. It makes me want to stay alive for a long long time. (she sighs) That’s the first reason.

Annie is a transplant from city life and her home in the tiny hamlet  of Bodega Bay, what she calls a”collection of shacks on a hillside,” is filled with contemporary art, modernist furniture, and classical music. Several film scholars have noted, as Ken Mogg did in a book review on Hitchcock’s architecture, that, “Hitchcock seems to have vastly enjoyed making his characters lovers of the arts and then working out with his production designers and set decorators how to depict those characters’ lifestyles iconographically.” Steve Jacobs, author of the book on Hitchcock’s architecture, stated plainly, “…artworks illustrate personality and social position of the occupant.” In Annie’s case, both music and paintings are displayed in her living room. Reproductions of paintings, including what appear to be a Modigliani portrait of a woman, a Braque still life, a print of a cable car scene from San Francisco, an image of a knight on a white horse, a Mondrian abstraction, and a Cezanne still life, and perhaps a Diego Rivera. It’s hard to see any of them clearly and none show up in searches of these artists’ works. 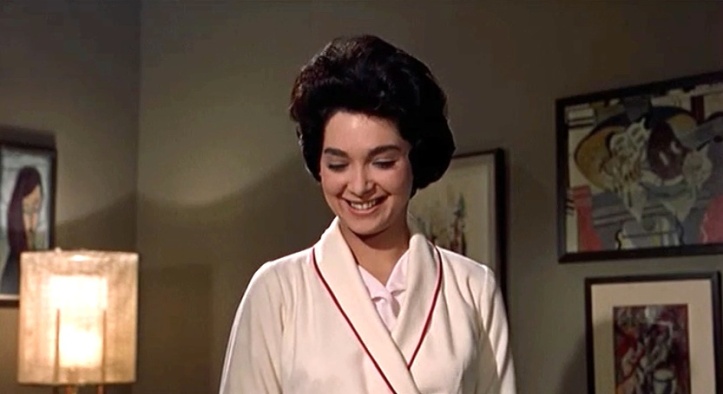 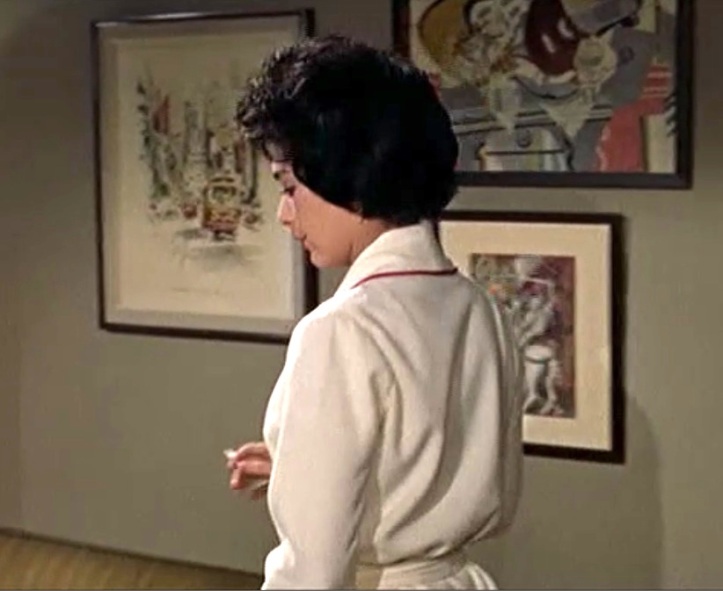 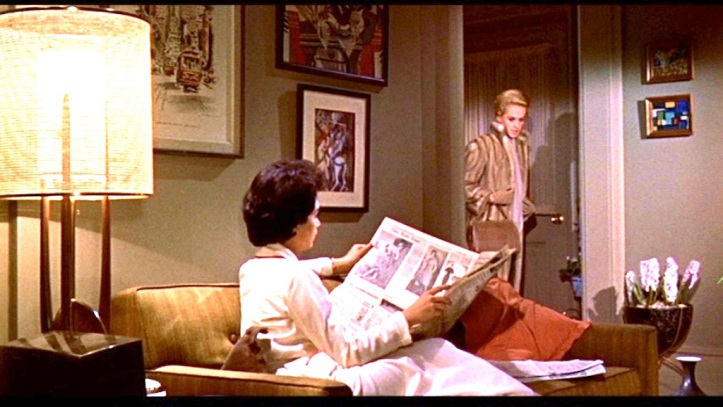 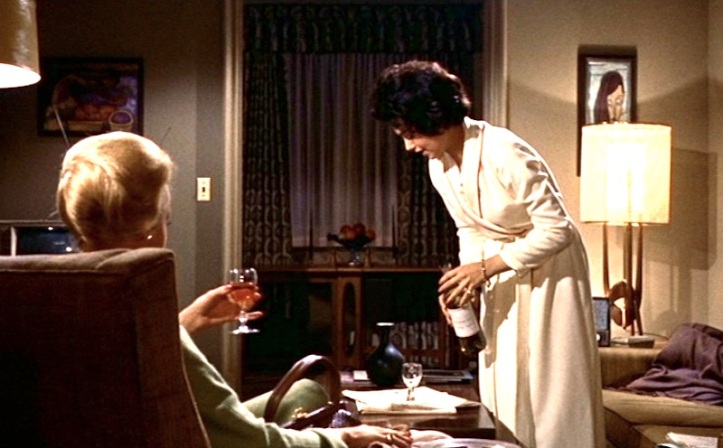 What, you may ask, is the point. Since this is not a project about the interior of Annie’s house but one that will reconstruct her garden, isn’t it silly to spend any time on Annie’s history or art inclinations? The answer to that is that while Hitchcock paid attention to the interior setting, the garden seems somewhat neglected and poorly designed. But they should have the same personality that Annie’s interior has. So I plan to give Annie the garden that matches her interests, her life, and he fate. When Melanie and Annie first meet, Melanie is gorgeous in her trendy clothes, upsweep hairdo, and fur coat. Annie, on the other hand, is in her garden, a smudge of dirt on her face which she tries to wipe off before Melanie sees it. 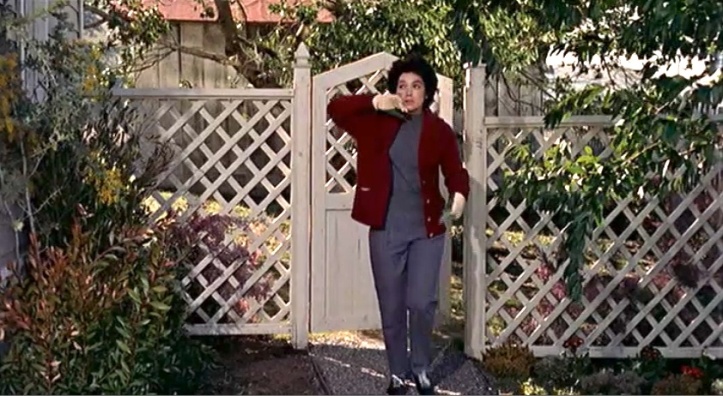 They talk at the front of Annie’s house and the contrast between them is obvious. 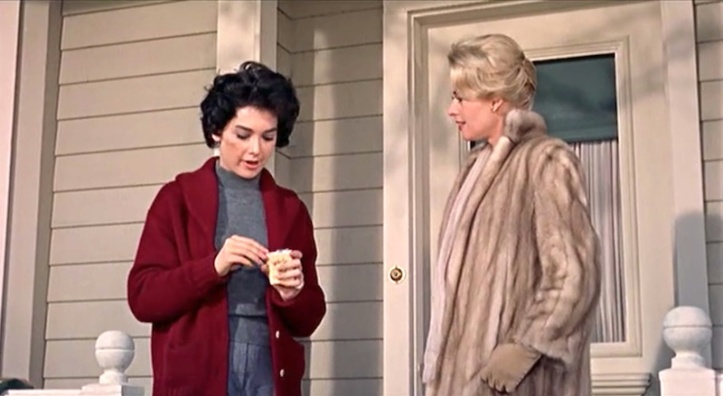 Their conversation about Annie’s garden has always bothered me because Melanie comments that it is “a very pretty garden” but in fact the garden is rather plain, maybe even neglected or merely tolerated:

ANNIE: I’ve been wanting a cigarette for the last 20 minutes. I just couldn’t convince myself to stop. This tilling of the soil can become compulsive, you know.

ANNIE: Oh, thank you. Well, it’s something to do in your spare time. There’s a lot of spare time in Bodega Bay.

I think Annie needs a better garden than she is given in The Birds. She clearly is a passionate, smart, funny, and very sensuous woman and if she were to put all her spare time into a garden, what would it really look like? First I will create a 3D mockup of a garden, an ideal version that in practical terms would be impossible to do in miniature. But it will be a starting point that helps me avoid a cliche cottage garden or anything too cute. If I can figure that out, that is the garden I will give Annie, the garden she deserves. 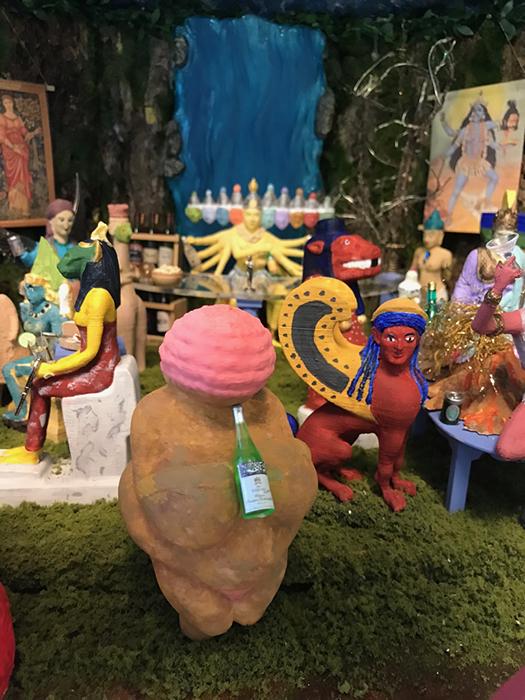 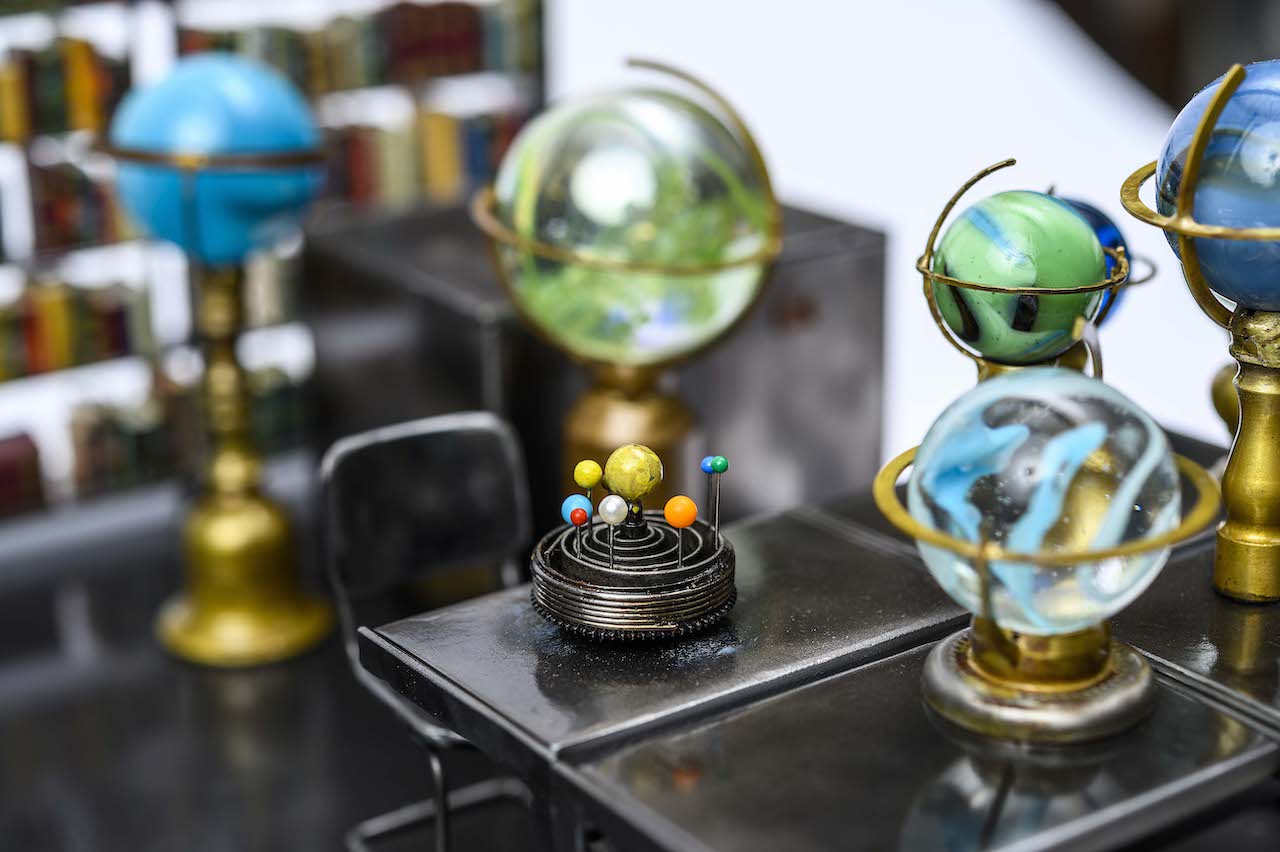 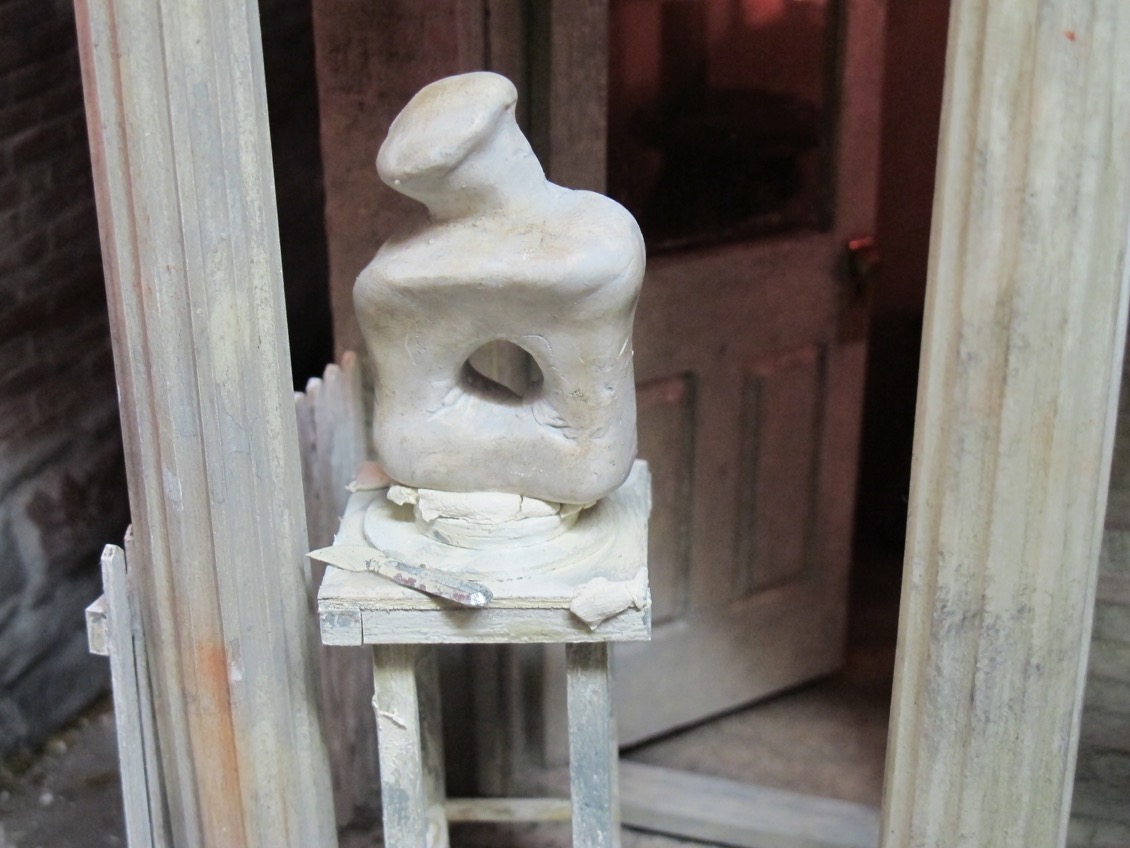